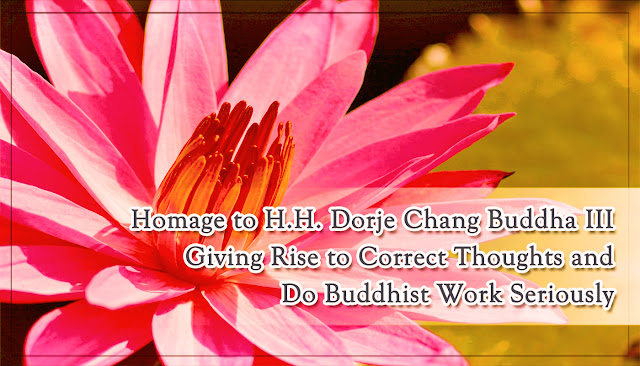 I am not sure whether you have had such experience in your daily life or not, “Well, this is clearly what he should do, but he does not do it and always let me clean up the mess. I am not going to do that either. This is his thing from the beginning.” Or, when people are working together, one may be “in hiding” and cannot be found. One may also use reasons such as having health issues as excuses.

Also, when doing Buddhist work, one may only do the things that one regards as having great merit. When releasing living beings from captivity, those who have such mentality want to select the pregnant fish or shrimps to release or pick big ones or scoop more. They think that only doing so will have great merit. When doing things, they measure what they do using the magnitude of merit as the standard.

Here, I would like to share a real experience of mine to you all. Because a fellow-sister had to go to another dharma center, her original work assignment was given to me to do for a while. Since her original work assignment was cleaning and sweeping the dining room when I first took it over, I complained while moping the floor, “This floor is so dirty. Hey, it is so disgusting!” Having such thought made things miserable. I became more and more afflicted and upset as I was sweeping. I did not even move the chairs in the right manner. Rather, I just moped across carelessly, making loud noises as the chairs were hit.

About a year ago, I began to feel a small swollen lump near my armpit. At first, there was not much feeling from it, with only a little bulging pain near the monthly period. However, six months later, the bulging pain could be felt at normal times and my entire left arm felt the swelling. Therefore, additional afflictions were generated when sweeping the floor.

Later, I spoke to a fellow-sister about this small swollen lump near my armpit. She said, “Why don’t you practice the Buddha Speaks of the Sutra on Healing Hemorrhoids and Illnesses?” Hearing what she said, I felt like a “bang” in my mind. “Right, why didn’t I think about that?”

Alas, my karmic forces were so severe, and I was completely obstructed. Since then, I continuously practiced according to the Buddha Speaks of the Sutra on Healing Hemorrhoids and Illnesses and at the same time gave rise to correct thoughts. I no longer held the attitude of regarding Buddhist work as having nothing to do with me. Think about that, how great good fortune it is to work at the temple. Isn’t doing the things for myself? Isn’t doing this to remove my negative karma? Hey, I didn’t even have such opportunity before. I am really a big fool. No wonder I am plagued by karmic hindrances!

From then on, I was always doing things happily regardless of what I was doing. If something could be done right away, I would just go ahead and do it, without thinking about whether it belonged to me or someone else. Suddenly, one day I found that the swollen lump near my armpit no longer painful. My arm had no swollen feeling either. Wow, that was amazing! I gratefully thank the empowerment from Buddhas and Bodhisattvas!

Amitabha!
Xin Wu, with my palms held together